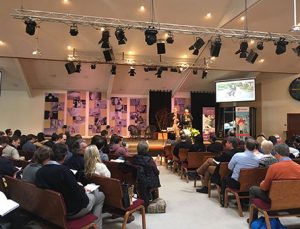 they knew they had to do something. But what could one couple living in a major European city possibly do?

Deb: “We contacted FamilyLife HQ to find out what was happening in Europe and were introduced to the work of FamilyLife in the UK.”

Mark Daniel, Director of FamilyLife UK: “We immediately connected and agreed to work together. I was amazed at how in only a few short months Trace and Deb mobilised a team of enthusiastic volunteers.”

Deb: “As far as a team, it was astounding.   Many of us barely knew or didn’t know each other before we started on this project.   As we approached the three main churches, working together to find couples that could help us work on this and amazingly things started to fall into place.”

“The steering team was fantastic with their visions for how to make this a great day. Even as we got close and needed helpers, we knew it was a God thing when the people we needed stepped forward at the times we needed them to do so for all the jobs we needed done.   It was faith building.”

The British and Dutch FamilyLife teams worked together with the Brussels team to deliver the event.

The impact was tremendous with very positive feedback from delegates:

“Hearing personal experiences that were so alike to our own and also having the time to just concentrate on ‘us’ and our marriage with no distractions. The interview clips, humour and stories were very well done.”   Lorna

“The workbook provided is very good and helpful. We appreciated that you stuck to the time schedule and the whole day was well organised. Good job and thank you for your heart for this ministry.”   Lisa

“The morning session made us both realise what ‘types’ we are, hopefully we’ll recognise those types coming to the fore next time an argument arises.”  Anonymous

We had a great day. I would love to know when this would next be in Brussels because I have some couple friends not from church that sounded super interested. It might be worth stressing that the content is not overtly Christian so I think it would be relevant for even non-church couples and perhaps a great way to bring them along to church and have them mix with Christians!    Anna

Deb: “I think the feedback speaks volumes of the impact to many of the couples.   We are excited to see where it leads in the Francophone community and it will be important to consider the Flemish community as well due to Brussels being so much of the centre point between the two languages.  Because we did this as a city wide, multi-church event, it will be hard to keep a pulse on this… but we want it to be the kicking off point for churches and couples to think about their marriages.”

When asked about their hopes for the future Deb responded: “We’re still trying to figure that out.   We will be working on filling up a translation team to translate the Together material to French. Since we had almost 200 people, we may need to find a bigger place as our hospitality times became challenging on the day.   We want to try to use local resources to encourage people to think about what God has in store for them with their marriage on a more regular basis, but we also want to look forward to another day like this for those who came to be able to speak the truth to their friends and invite them to come with.”

A Day Together was developed by FamilyLife UK. Learn more...

Check out our forthcoming events

Learn more about what to expect at A Day Together.

Some helpful information on what it takes to organise an event in your community.

Click here to stay up to date on our news and events.